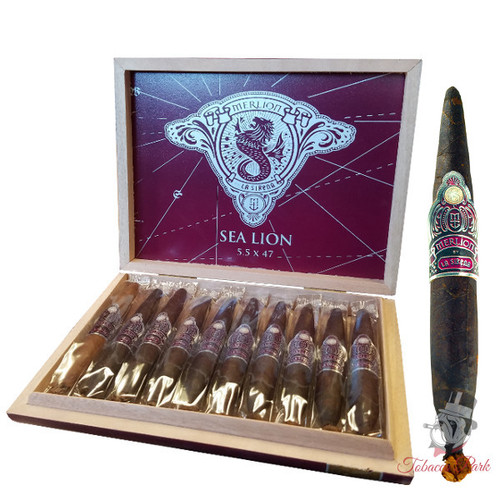 The Merlion by La Sirena 6 different types of tobacco.  The following is the blend composition of the Merlion Sea Lion Maduro.  This is the only blend in the La Sirena portfolio to currently (at press time) use San Andres Mexican.

The Sea Lion Maduro started with a shot of white pepper as I burned the shagged foot.  Once the burn moved into the base of the cigar, some coffee flavors emerged.  The white pepper was also quite prominent on the retro-hale.

By about the five percent mark, the coffee notes had transitioned to more of an espresso syrup (basically a coffee note that weighed heavy on the pallet with some level of sweetness).   I also picked up some citrus notes as well.  The white pepper notes moved into the background.

By the midway point, the white pepper began to increase.  The cigar developed some of the sharp, pungent flavors that I often find with San Andres Mexican wrapped cigars.  Toward the last part of the cigar, the Sea Lion Maduro the pungent spice was in control as it reached the tapered part. The resulting nub was cool in temperature, so the cigar wasn’t overheating.  The cigar was soft to the touch.

This product hasn't received any reviews yet. Be the first to review this product!